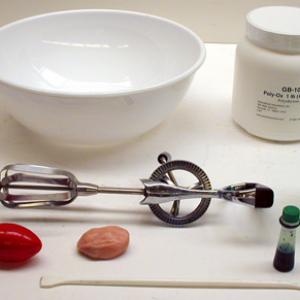 Mix the polyethylene oxide according to directions.  Add some food coloring to make it easily visible.  The directions for mixing this are: mix 20-25 ml of a dry alcohol such as anhydrous methanol or ethanol with 3-4 grams of polyethylene oxide in a clean, dry 600 ml beaker.  Swirl the mixture to completely wet the resin with alcohol.  Add 350-400 ml of tap water in the mixture "in one pour" and stir until the resin has gelled completely.

The unusual properties of the gel can be seen in two ways.  One is to start pouring the gel from one beaker to the other.  Once the pour has been started the gel will continue to siphon even if the pouring beaker is turned upright. If you look closely you will see that the gel moves up the side of the beaker in a thin film which thickens to a strand as it falls to the other beaker.

The second way to demonstrate this is with an egg beater or mixer.  First use corn syrup and the mixer.  Turn the mixer up to the first speed and show that the corn syrup is thrown away from the beaters.  Then do the same thing with the polyethylene gel.  This time notice that the liquid not only climbs the beaters but that eventually the whole gel mass is on the beaters.

A mixture of 2 parts corn starch to 1 part water will make a very fun and interesting non-Newtonian fluid.  If you take some into the palm of your hand, the fluid will run through your fingers very easily,  However, if you strike the mixture or try to make it move very quickly, it will set up like a solid and you will leave no dents in the surface.  One of the names given to this mixture is "MUNG".

References:
An excellent website for this type of action