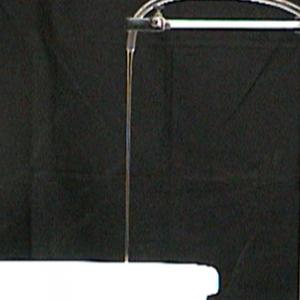 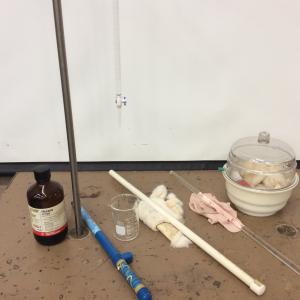 Set the Tygon tubing so that you can get a nice stream of water falling straight down out of the end. Charge up the PVC rod and watch the water stream deflect as you bring it close.

Use the method of images to calculate the force on a dielectric or conducting sphere in front of a point charge;

The Electrostatic Deflection of Fluid Streams

I had constructed a cylindrical funnel about 4 cm in diameter and about 25 cm long with a small nozzle at one end. The funnel is held with its axis vertical by a three finger clamp. When filled with water it takes about 5 minutes to empty. If a positively or negatively charged rod is brought near the falling stream of water, the stream is deflected substantially from the vertical toward the rod; if one moves the rod down a bit past the point at which the stream breaks up into drops, no deflection is seen. If the same experiment is repeated with hexane as the falling fluid no deflection is seen no matter where you place the rod along the stream.

In order to understand these experiments let us consider the following situations: (a) the force on a grounded conducting sphere of radius, a, due to a point charge, q, at a distance, D, and (b) the force on a neutral dielectric sphere under the same conditions. My intent is to substitute a point charge for the charged rod in the experiments and consider the fluid stream to be just breaking up into spherical drops at the point the field influences it, in other words imagine holding the rod at just the point at which the stream breaks into drops.

The force exerted on a grounded conducting sphere by a point charge can most easily be solved using the method of images (5). The result of the calculation is that the force on the sphere can be calculated by assuming the presence of an image charge, Q, located along the line joining the point charge and the center of the sphere at a distance (a2)/D from the center of the sphere; Q has magnitude aq/D. The force, F is given in equation 1.

Notice that force varies as the inverse cube of the distance.

The force exerted on a neutral dielectric sphere due to a point charge can be calculated by using a multipole expansion for the potential function and then solving Laplace's equation(6).  Doing so one finds that the dipole moment, p, is given by equation 3 (assuming a << D allows us to ignore higher order poles).

We may then calculate the force on the sphere by finding the force the induced dipole exerts on the point charge and using Newton's Third Law. The force then is

Notice that this force varies as the inverse fifth power of the distance and that the dependence on the dielectric constant is such that other things being held constant the force varies only by a factor of four as we let K go from 2 to infinity (most liquids are in this range e.g. for water, K = 80; for cyclohexane, K = 2.02). At this point we can see that there is something suspect about calling on the difference in molecular polarizability as an explanation for the experiments, for we could easily compensate for the rather weak dependence of the force on dielectric constant by simply changing the distance of our charged rod to the stream a little; to change the force by a factor of four one needs to vary the distance only by a factor of about 1.3.

Comparing (2) with (4) by taking the ratio of the two forces we find that the force on the grounded conducting sphere is always greater and let us assume that what is going on in the experiments is that water is behaving like a conductor and cyclohexane is behaving like an insulator.

How good a conductor is water in this situation? It depends a bit on the source of the water. One has to go to extraordinary lengths to get water to behave like an insulator as it readily dissolves carbon dioxide from the air and thus becomes conductive. If I use my ohmmeter to measure the resistance of the water from the top of the column of water to the point below where it begins to break into drops I get a value of about 3 megohms. The electrical capacitance of the cylinder of water is less than about a picofarad (a rough estimate can be had by calculating the capacitance of a sphere of about the same dimensions). The RC time constant is then on the order of microseconds. It takes the water a little less than a tenth of a second to fall from the nozzle to the point where it breaks into drops, so water behaves like a good conductor in the sense that charge has time to fully charge the column of water during the time it takes a bit of water to leave the nozzle and break free of the stream.

Can we show that water is behaving like case (a) discussed above? If the drops as they are breaking free of the stream are behaving like grounded spheres, then they ought to have a charge on them, otherwise in case (b) the drops ought to remain neutral. Using a proof plane and an electrometer, one can show that the drops are charged. Hold a charged rod near the stream while placing the proof plane in the drops as they fall below. Then use an electrometer to measure the charge on the proof plane. I find that the proof plane is charged oppositely to the rod. If one brings the rod near the stream and then removes it and then inserts the proof plane in the drops one finds that the proof plane is charged in the same sense as the rod. Both of these results are what one would expect in case (a). An amusing variation is to take two charged rods oppositely charged and hold one near the stream and the other near the drops. If the same experiments are done with cyclohexane one finds that it behaves like an insulator, that is, its resistance is not measurable (by my ohmmeter, anyway) and that the drops are not charged. To get a feeling for the quantities involved I repeated the experiments using a small spherical electrode on an insulated handle instead of a charged rod. I charged the rod to a few times 10-8 coulombs. I estimate the radius of the water drops to be about 0.1 cm and the distance of the drops from the charged electrode to get a good deflection about 2 cm. Then the force exerted by the electrode is (assuming case (a))

where q is measured in units of 10-8 coulombs. This is to be compared with the force of gravity on such a drop, which is about 4 X 10-5 newtons. If one assumes instead case (b) the force is

where q is measured in units of 10-8 Coulombs.

To further prove the point, one may take a charged rod and bring it near the falling drops of water (considerably below the point at which the stream breaks into drops so there is no conductive path for water under the influence of the field of the rod back to the column of water). No deflection of the drops is observed.

Although there is indeed a force induced on a dielectric fluid as a result of the induced molecular polarization this force is not large enough to explain the deflection of a stream of water and cannot account for the difference in water and cyclohexane streams. The fact that ordinary water is a conductor and cyclohexane is not can account for this difference and also the observed charges on the water drops. It would be nice to repeat the experiment with a fluid that has a high dielectric constant and is a good insulator. Acetyl nitrile has been suggested to me, but my first attempts at using it were foiled in that the acetyl nitrile proved to be a conductor; I suppose it wasn't of sufficient purity.

Brindle and Tomlinson, "Deflection of Falling Solvents by an Electric Field"