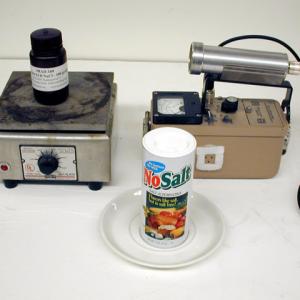 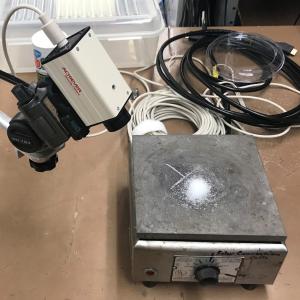 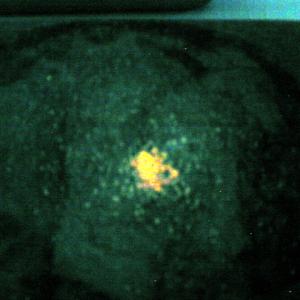 Table salt ( NaCl ) when irradiated will turn brown but will not be radioactive.  When some of this salt is dropped onto a heated hot plate, flashes of visible light will be given off and the salt will return to its normal white color.  Use a black and white camera to show this in a dark classroom.  The salt will glow for several seconds after it is placed on the hot plate.

Caution: DO NOT place the camera above or too close to the hot plate.

The explanation is:   The table salt exposed to gamma radiation from a cobalt 60 source excites electrons in the salt to a higher energy level.  In this excited state, electrons in the salt can absorb certain wavelengths of light, resulting in the observed brown color.  Heat enables the excited electrons to fall back to the ground state with the emission of a flash of visible light and the return of the white color.

The technical explanation is: When white NaCl is exposed to gamma radiation from a Co 60 source, a number of defects are formed in its crystalline lattice resulting in a color change to orange brown.

Chloride ions are ionized into chlorine atoms and electrons:

When heat is added, the molecular chlorine, Cl2, and the sodium atoms, Na 0, recombine to form the white salt of sodium chloride, NaCl, and the release of light energy.

Salt substitute ( KCl ) is naturally radioactive due to the Potassium content.  (Potassium 40 is the most abundant radioactive source on earth ).  Counting rates observed with the Geiger counter should be 3 to 4 times background.