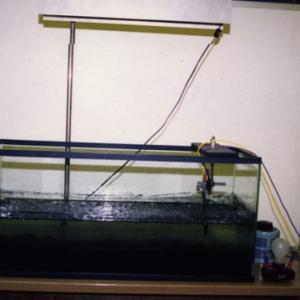 This demo is based on an experiment where amino acids were created using much the same conditions.

Set the fish tank on the table.  Fill this with water to a height of 6 1/2 inches above the table and you will have approximately 40 liters.  Put the 10 lb. of charcoal into two large plastic beakers with the small sponge animals hidden in amongst the charcoal.  (Note: The sponge animals are optional.)  The liquid nitrogen is picked up from Biochem Stores ahead of time.  The rest of the chemicals can be measured out into their own separate petri dishes.  Place the U.V. lights above and/or behind the tank.  Have the electrodes all set up and ready to put into the tank when ready.  Procedure: The Lecture Demonstration Coordinator helps with this experiment.  Pour the charcoal into the tank of water.  Now with stirring pour in the 2.4 liters of liquid nitrogen.  A nice rolling fog will develop.  Next add the sulfur (60 gr.), calcium (120 gr.), Phosphorus (Phosphoric acid - 13 ml.), and the trace minerals sodium, chlorine, iodine (Iodized Salt), potassium (Salt Substitute), iron, copper, zinc, (Metal filings), manganese (Manganese Oxide - MnO2), Silicon (Sand), Molybdenum and Florine (We usually do without these two).  Now we have all the ingredients to make life.  Add a little energy in the forms of U.V. radiation (U.V. Lights), and Lightning (The electrode with the ball on the end of the rod is placed into the tank and excited with a Tesla coil so that "lightening" can be see jumping from the Tesla coil to the ball ).  At the end of lecture the teacher pulls out one of the sponge animals that was hidden in the charcoal, showing that indeed "life" was produced.

Caution:  Make sure you are not touching any part of the tank when the Tesla coil is running.