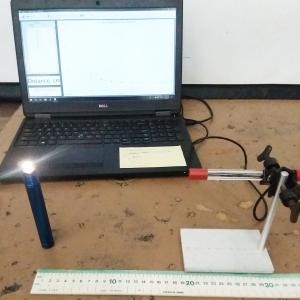 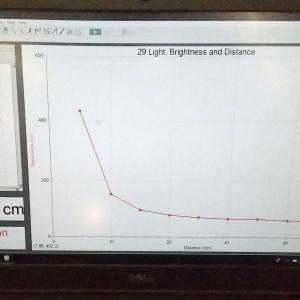 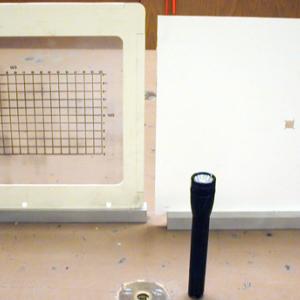 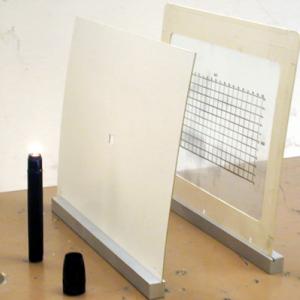 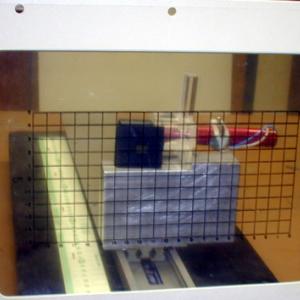 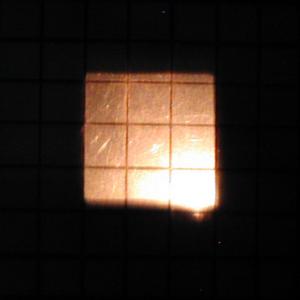 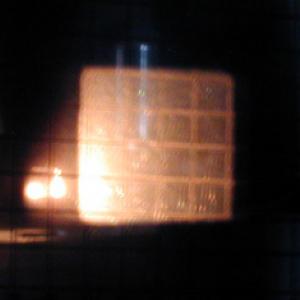 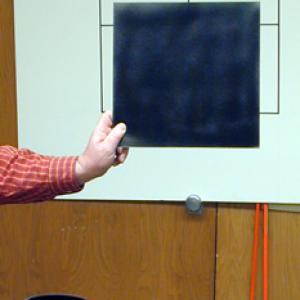 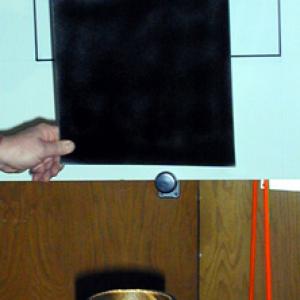 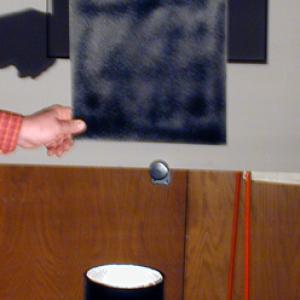 Unscrew the focusing cap from the maglite and set it at the 0 cm position of the meter stick.  Start with the light sensor at the 10 cm mark and plot your first point.  Move back at 5 cm intervals as you plot the rest of the points.  In inverse square graph will be recorded and curve fitting may be applied.

The Maglight setup is a smaller version of that mentioned above and is intended for individual viewing or lab work. Instead of 1 foot square cardboard we are using a 1 cm square mask.

The Maglight set up on the translational stage and railing is a more automated version of the simple Maglight demo also using the 1 cm square mask. This is primarily intended to be used in the classroom with a video camera looking at the grid.

NOTE: The camera must be positioned so that it is not directly inline with the Maglight and the masking hole.

Although not shown in the pictures above the overhead projector can also be used to show inverse square. Move the projector very close to a screen and turn on and measure the area illuminated. Move the projector back twice as far and again measure the area illuminated. Continue for 3Xs the distance and 4Xs the distance and the are should increase for all of these according to the inverse square model.

Another simple way to do this is to use a laser pointer, meter stick, and a pair of the 2 D diffraction glasses we use for outreach. You will get a square pattern of dots that will expand as you move the glasses/diffraction grating from 25 to 50 to 75 to 1 meter on the meter stick.

Use a 100 W light bulb as a pinpoint source. To do this align the filament so that its long axis is perpendicular to the large white board. Once aligned set the masking tube over the light bulb to enhance viewer observation. Holding the single one foot square at distance 1 from the light bulb show that it only covers one square of the large grid boards. Move the large grid board back to 2X the distance and show the shadow now covers 4 squares. Repeat by moving the board back to 3X and 4X the distance and show that the shadow now covers 9 and 16 squares respectively.